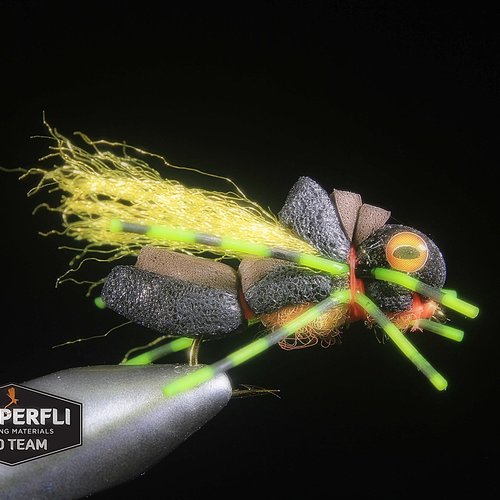 It is called BroodX 2021. So, what exactly is this event that everyone, especially fishermen are talking about?  And is it really true that our waterways and roads are going to be blanketed with all of these black, red, and orange insects that some say will emerge out of the ground in such numbers that our lawns will actually look like they are moving? Well, only time will tell. But it is very possible that we about to experience an event that could very well be spectacular – especially when it comes to fishing on the surface.

But to better understand what could happen, it’s best to understand the how and why. The Cicada insect, many times mistakenly called locusts (locusts are actually part of the grasshopper order of insects) live a life underground for – at most a 17-year period. When a group of cicadas emerge – that group is called a “Brood”. And believe it or not – there are currently 17 different “Broods” of active colonies of cicadas – named from Brood I to Brood XXII, utilizing Roman numerals for labeling. The reason for the difference between the 17 active broods now in place and Brood XXII (22) is that there are 5 broods that are extinct. Each brood emerges in different numbers and at different years. Most of the broods emerge on a 17-year cycle. What makes Brood X (nicknamed the Great Eastern Brood) unique is that is covers the largest area involving 16 states and the sheer numbers of hatching insects is truly amazing. Calls for this year’s emergence have been estimated by science to be at 1.5 million cicadas per acre!

Typically beginning in mid-May and ending in late June, these cicadas will begin to emerge approximately when the soil 8″ beneath the ground reaches 64 degrees Fahrenheit.  A nice, warm rain will often trigger an emergence. Back in 2004, when the last emergence occurred, people began reporting cicadas around May, 13th. Why these amazing insects spend so much time underground is really a mystery. One suggestion is that since their diet of feeding on the sap of tree roots while underground for so long is such a nutrient poor diet, it takes longer for them to develop into the adult stage. But it also is part of their plan for survival. Staying underground longer makes them less available for predation. And appearing in such large numbers to lay their eggs above ground also helps in their survival. The numbers appearing above ground are so large that there will always be a high survival rate for the species.

What is pretty cool about it all is that they plan their emergence. As the soil temp starts to increase and approaches the magical number of 64 degrees, tunnels are secretly being prepared to within inches of the ground surface so that when the timing is right, they only have to burrow a few inches to pop out!  So soon – very soon, there’s going to be a lot of digging going on.

So, what does all this mean for us fishermen who experienced this phenomenon in 2004 and for those who are anxiously waiting to experience it for the first time? Well, I can tell you from having experienced it first hand in 2004 – it’s pretty amazing. I can remember first walking down to the farm pond situated in the woods behind my house and casting into the water with a rough looking fly pattern I had tied up quickly. The looks of the pattern did not seem to matter much though since in a matter of a half hour – the foam had pretty much been chewed up from the numerous bass and panfish that had eagerly taken it – some a few feet from the bank. And on the trout water, I had spent time on the Yellow Breeches, Penns Creek, the Tulpehoken and others and for three weeks – it was amazing. No need for any other pattern that one might normally use this time of year. A box full of flies tied with black foam, orange bodies, and yellow or orange wings was all one needed. It was crazy good fishing.

In anticipation of the Brood X emergence here in the northeast, there have been many excellent patterns being shown and talked about. And the great thing about them – they are all pretty simple patterns to tie. Although some incorporate black deer hair for floatation, most are utilizing foam to “float the boat”. And actually, although it is always neat to try and represent the natural as close as you can while at the tying bench, with the cicada pattern – it really is not necessary since it will be a blanket hatch of sorts. The fish will not be selective and, I believe, the profile of the tie is what will trigger the strike and is most important.

Below is the pattern I mostly tie for this emergence. I have found that when tying any pattern that calls for foam – that Semperfli offers the best material available in that it is a lighter material and more “airy” or open celled than other foam available. Their foam creates a much higher floating tie. I also utilize the Semperfli floating poly yarn for the body. This material comes spooled and is extremely easy to use. No dubbing on the thread – just tied in and wrapped. As I mentioned – if you’re going to fish this emergence, it is a good idea to have a few boxes of cicada patterns. A simple Google search for a cicada fly pattern will yield you to many different patterns to follow and YouTube videos to watch.  I will mention though that I found that the use of the Semperfli material, especially the poly yarn allows the tyer to fill a box with durable patterns in a hurry. A couple things I found on this pattern is that although I do show this tie as having eyes on it – I really do not think they are necessary. It is the profile that will trigger the strike. The fish will not care about the eyes. Also – change up the color of the winging material. Orange, yellow, and a more subdued color such as tan has always produced strikes for me.

So – yep, it’s going to be pretty amazing. We’re going to hear that constant chirping sound throughout the day, we may have to slow down a bit sooner when we come to a stop sign so we don’t slide on the bugs on the road, and when we mow the grass for the first time this spring -  we may have more bug guts flying out the chute than we do fresh cut grass. But more importantly, when we walk down to the stream and make our first cast with a piece of black foam tied on……. Yep – hopefully it’s going to be pretty amazing.

Craft foam on top of the Semperfli foam – color choice

Wing: Antron tied in and separated to form two outstretched wings to the side.