After using the Fishpond Upstream Tech Vest for countless hours on the stream, Tom Herr gives an honest review of this wildly popular vest.

“To each his own” is a quote that many use to describe others likes and dislikes of whatever it may be and in the world of fly fishing and the types of sling packs, lumbar packs, chest packs, and vests that are available to us to carry our gear in – I think it can be agreed upon that this quote has meaning. What one may find favorable in a sling pack another may not like and they decide to go with the lumbar pack. Another loves the fact that the chest pack keeps everything “right there where you need it” and another likes the old school type of carry – the vest. Whatever it may be – I tend to think that perhaps there just is not an absolute perfect way of doing it, at least that’s been my thought over the years. And I also think that manufacturers tend to think the same way because every spring, there seems to be a new “system” or design that cares for the issues of the previous model. Whether it does or not is up to the individual to decide because what one may think is an issue, another may not think so. Again, “To each his own” I guess.

And on the “Fish Rack” as my wife calls it, that part of my garage where all our gear is hung and stowed, waders, packs, slings, staffs, etc. – one would tend to think that whoever’s gear this was – that they just could not make up their mind as to what system they liked to use. There you will see sling packs, lumbar packs, and chest packs that I’ve had owned over the years and to be honest – the reason they are there hanging was because – for me the issue was not the design of the systems of carry I tried, but instead that whatever I used seemed to cause the need to sit down along the stream or river after a few hours due to lower back pain or pain between the shoulder blades. Perhaps it’s an age thing I guess, since I’m 5 years away from 70 but it actually started about 10 years ago and I just dealt with it. And it really rose up and bit me when I was on the tributaries of Erie chasing steel because I was on the water for 12 hours a day and it did kind of cause an issue. And perhaps that’s the reason why I kept trying different ways to carry to help with that. 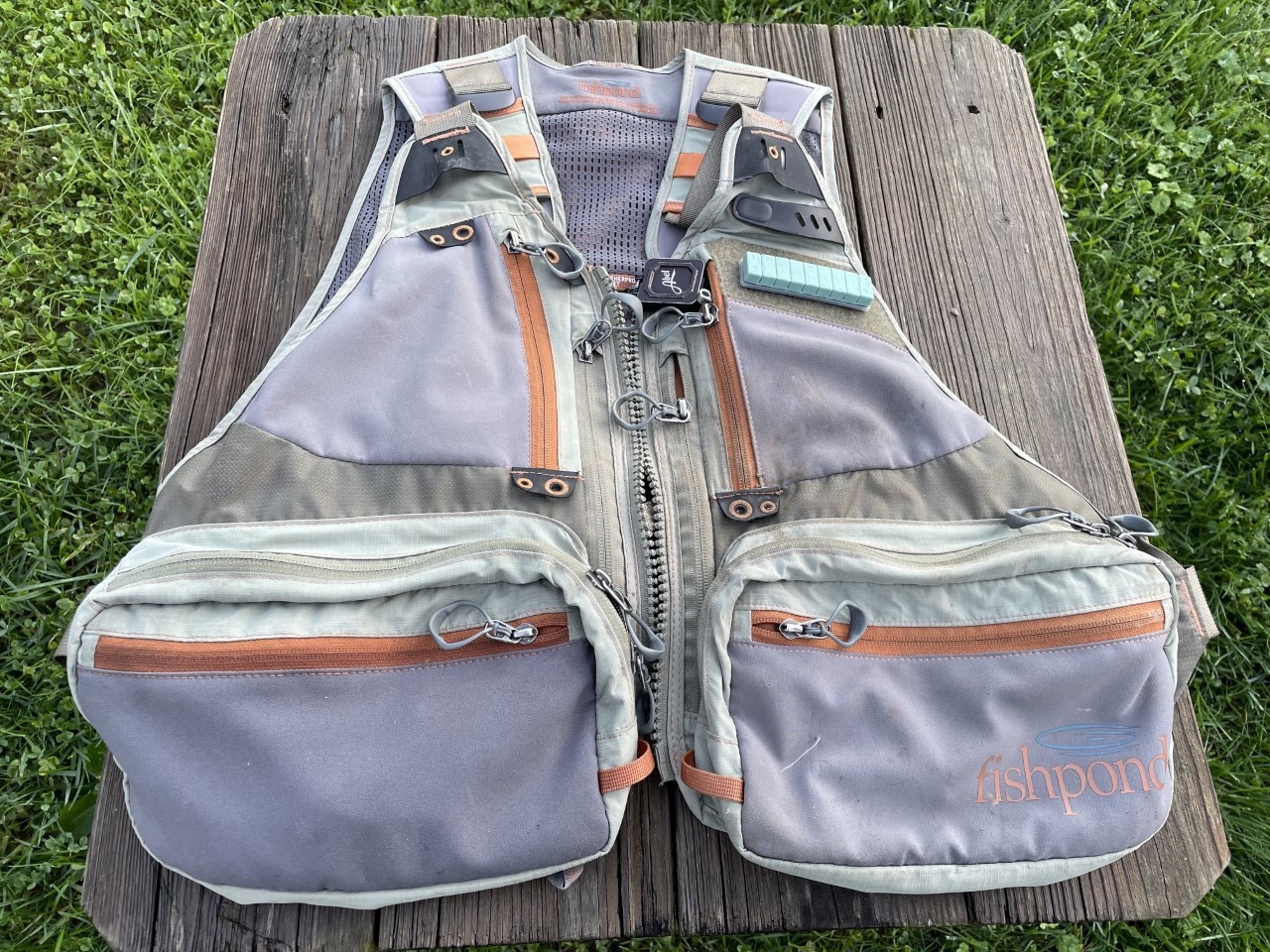 And then when the Fishpond order came in the Lancaster shop a couple years ago, and I opened it up to check the order in and stock the shelves, I saw this new vest that they came up with. Called the Upstream Tech Vest, it is a vest that is lightweight, hangs nicely from the shoulders, has a net holster in the back, and generally is a carry system that intrigued me from the moment I saw it. It has been years though – probably 30 or so since I wore a vest along the stream. Back then – it’s pretty much all we had and the one I started with when I was a young punk of a teenager was one mother sewed up for me. This Fishpond one that I was now holding and trying on – was a bit different from the one she came up with though. And I wondered if perhaps what I needed to help out with the pain between the shoulder blades was to go back to my roots and try that system once again. Which I did. And it’s what I have been using for the past two years and now – when I sit along the stream its not because I need to relax my back, it’s because I want to sit and watch and listen.

The Fishpond Upstream Tech Vest I have used exclusively now for the past two years and, again, like any carry system I think, although it is not 100% the perfect way to do things, for me it comes close. The fabric is super lightweight and durable. Made from regenerated nylon waste material such as old carpet and fishing nets, I have yet to see where there has been any tears or stitching failure.

Understand though that it is not waterproof and if you wade in deep or bend over while kneeling in the water and the vest is not secured in the middle, one side may dip down into the water and get the interior of the main side pocket wet. Speaking of pockets, it has 14 of them allowing one to carry a lot of stuff. Do you need that much storage, perhaps not but it is nice to have the option to move things around, even if you cut back on the number of things you now like to carry on the stream. There are three things though that I think really makes this vest stand out for me. First is the net holster in the back. Although there are a few vests out there that have this option, not many of them do and this holster is an easy one to drop your net into. When guiding for steelhead, I have used the Fishpond Nomad Mid Length Net as well as the Nomad Mid Length Boat Net in this holster without any issues. The net balances well in the holster, does not drop or slide out when bending over, and is easy to remove and slide back in. The second thing I really like about this vest is the water-resistant pocket with water proof zipper for security on the inside right-side chest area. A perfect place for your phone to rest while on the water. 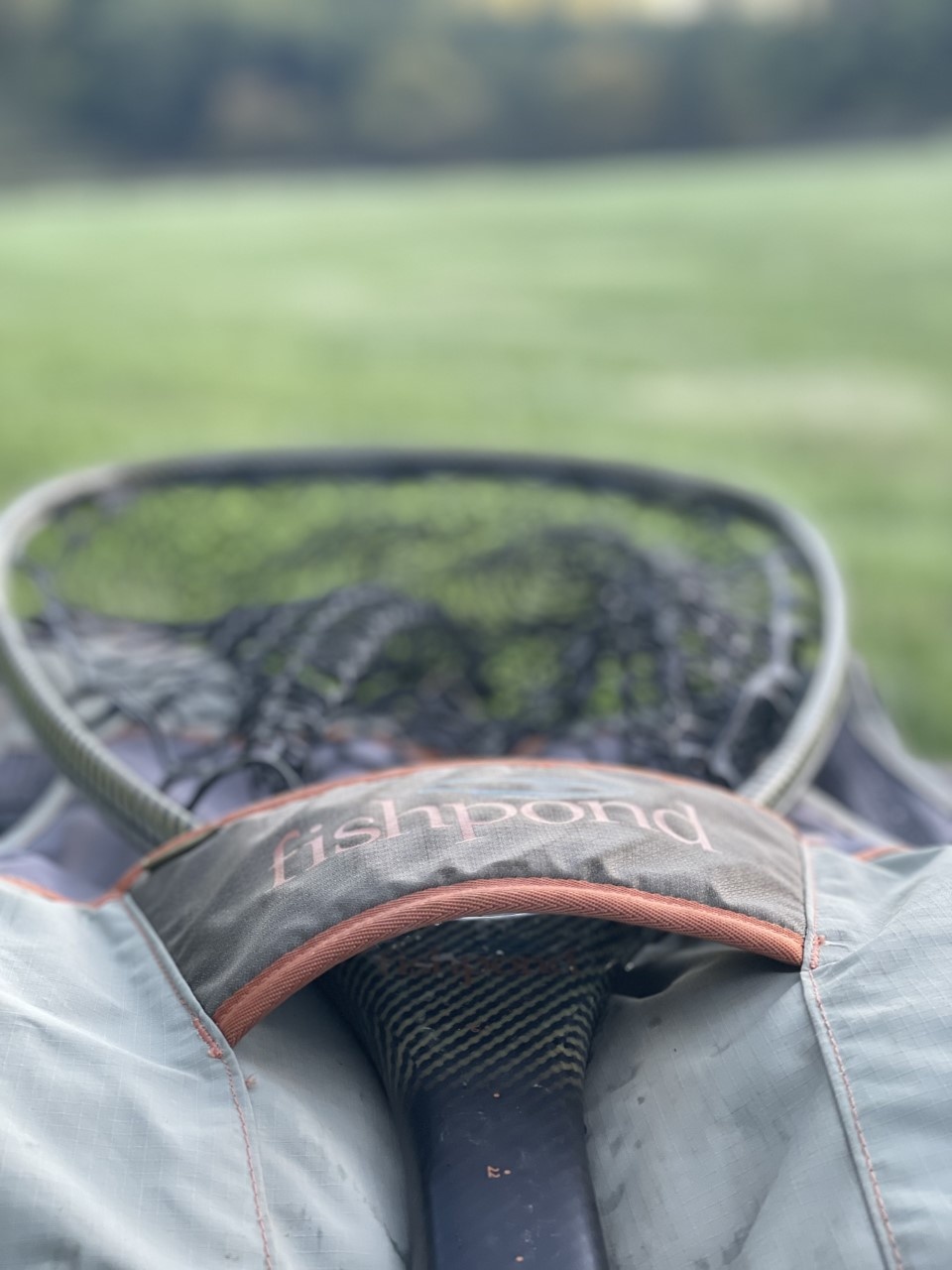 The last thing I really like about this vest is that since using it – the pain I felt in my lower back and between the shoulder blades from standing and walking long hours along the stream or river is pretty much a non-issue now. Perhaps because now the weight of my carry is distributed evenly on my shoulders instead of the middle of the lower part of my back or hanging from one shoulder – whatever it may be, it worked for me. And in the two years that I’ve had it, it has seen a lot of time on the water where it’s been tested and there have been no failures with the stitching, zipper pulls, fabric tears, or adjustment straps. Pretty much bomb proof so far. But as mentioned above – nothing is 100% perfect and below are what – for me, are my likes and dislikes………

1. Lightweight and durable fabric that fits and lays close to the body alleviating any protrusion that may cause the line or leader to snag on.

3. Net holster in the center rear.

7. Weight distributed evenly through both shoulders easing back pain.

1. Although the rear pouches have a large space to carry items, when items are placed there, it can inhibit sliding your net into the rear holster because those items cause the holster to sit at an angle.

2. Fly patch material is soft and will wear quickly when placing and removing flies. It can be removed and replaced with Fishpond’s Tacky Fly Dock which will last a lifetime.

3. Material is not waterproof or resistant. Not many vests are though. One thing that I do if I’m guiding on the stream for the entire day is, I do wear a small waterproof hip pack that I carry my first aid kit in. It’s lightweight, does not cause any issues and with the vest, I don’t even realize I have it on. 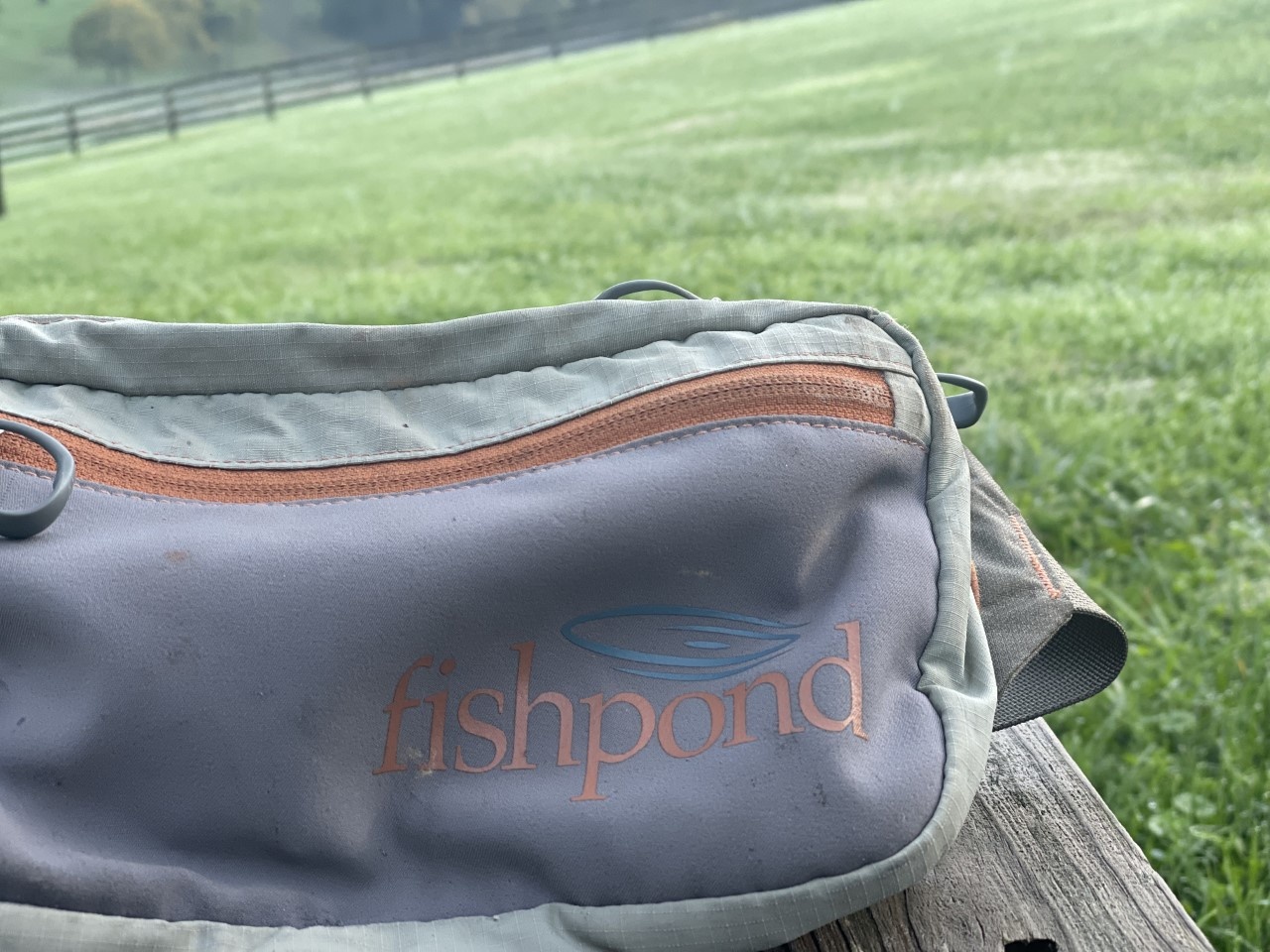 Everyone has their own preference as to what system they like to use to carry their gear. Perhaps you’re a minimalist and carry just a few items which is absolutely great and good for you. You may swear by the sling pack, or the lumbar pack. Whatever it may be though, if you’re looking for something new to try out, stop in and try on the Fishpond Upstream Tech Vest. Try dropping a net into the holster sewn into the back of it, check out the phone pocket on the inside, and take a look at the material it’s made with. If you’re looking to switch to a different way to carry your items, it’s worth a look.

Although she was truly an amazing lady and a fantastic seamstress who could create anything with thread and fabric at the sewing machine, I gotta admit - this vest does have a few more features than the one mother created for me back in the day.